The toughest race with the warmest heart.

In 2018, the Voet van Afrika Marathon celebrated our 40th race. So it was fitting that we were joined by celebrity athletes, including amputee athlete, Xolani Luvuno. Xolani completed the full marathon, including a tough climb over our Overberg mountains – on crutches – in a time of 06:05:41.

Xolani’s story is inspirational – and tells of courage in the face of overwhelming obstacles.

His tale includes overcoming an amputation above the knee in 2009, when he was diagnosed with bone cancer. When he became addicted to drugs at a young age, Xolani begged at a traffic light in Pretoria, living on the streets.

One day, Pretoria businessman, Hein Venter, started a conversation with Xolani. Hein found he was so moved by Xolani’s story, that he decided to help. He took him off the streets, and offered him a job, and a prosthetic leg. But on one condition: Xolani had to quit drugs.

Xolani was weaned off drugs, and later off alcohol. And Hein, a keen runner, then also encouraged Xolani to join. 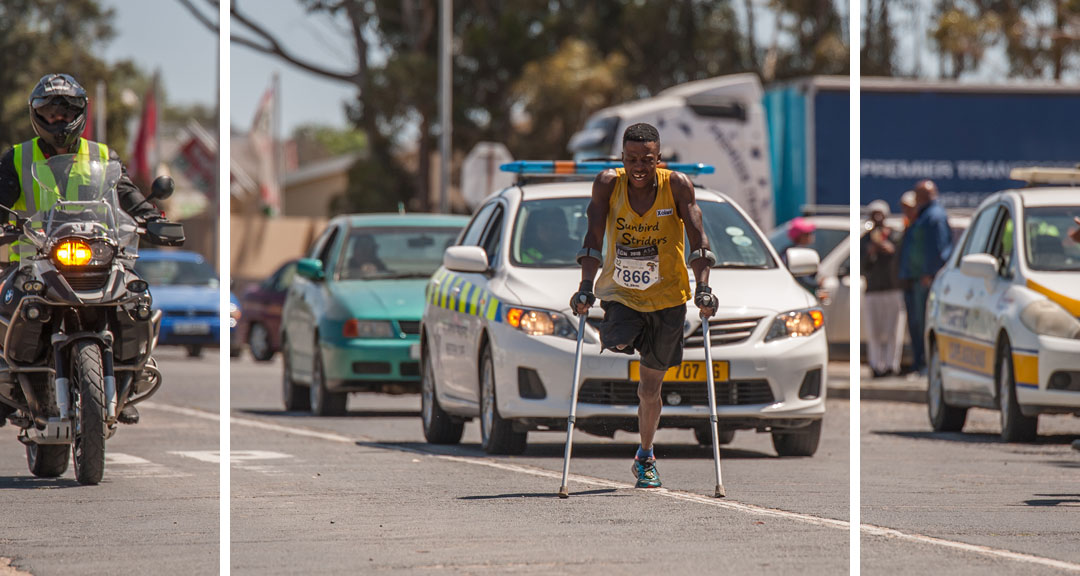 A short while later, Xolani completed his first full marathon: The Wally Hayward Marathon, on his prosthetic leg.

Since then, he has reached the finish line of the Comrades Marathon, and has trained for and finished the Iron Man competition (for which he had to learn to swim).

He has been featured on shows such as Carte Blanche. And has inspired runners around the world with his mental and physical strength – including runners at our Voet van Afrika Marathon.

This year, you can register online through ChampionChip (www.championchip.co.za). Online entries close 30 September …

What an amazing race. Will definitely return. Thank you Bredasdorp for your hospitality.